Judah: Liberation I - An excerpt from the novel by Y. N. Bushehri - Illustration by Jessica Kellicut

Judah sheds his old life the night of his debut at the Majlis of Elders. The night is a dark canvas, poised for change. It’s befitting for Yalda, the longest night of the year and the eve of solstice.

A row of lanterns sputter to life on the stage. Shadows dance and flicker, carving Judah out from the darkness before bathing him in a circle of warm, golden light.

An unseen crowd congregates before him in the chamber beyond, and the starlit dome of the council hall swallows their withering whispers and concealed coughs in its vast bosom.

Tension houses itself at the nape of Judah’s neck, dense and taut, sweat beading on his high forehead.

This is the burden of any beginning, the hungry silence of an audience awaiting to fill itself on a story it has not heard before. Judah burns with the fire of his own story, one he does not yet know how to recount, but fortunately, his instrument tends to craft notes worth more than words. All he has to do is wake it and carry the tale it wants to tell.

He embraces his setar, his lifetime companion for the last twenty-odd years, and cradles its neck in the palm of one hand. Its bowl nuzzles against the crook of his right knee. Judah fiddles with the knobs, and the fine copper strings shiver to life one by one.

When all the strings ring true to his ear, he strums an open-handed chord. The audience exhales as one then, coalescing into a single entity made of indistinct silhouettes. Judah closes his eyes and lends his instrument his voice.

Judah is a lone man on stage, but his body becomes a symphony. The drumming of his blood in his ears becomes his rhythm, his guide. The dancer inside him sways with the pattering of notes. His calloused fingers extend into instruments themselves, sliding along the slender neck of his setar and planting trilling kisses along its frets with of fingers. There are a thousand eyes on his picking finger brushing the copper strings like the wings of a butterfly fluttering against a blade of grass.

The story unfolds, and Judah feels the moment he captures the audience. This is an old tale of confinement captured in the melancholy cry of his setar, painting an invisible cage with unseen shackles tethering Judah in his place.

Freedom can be a complicated, chaotic affair.

In a different life, Judah might have allowed himself to be lost in the heat of this joint creation, ruled by rhythm and beat. But as he moves into the more rhythmic space of the movement, his eyes snag on a familiar face sitting close to the stage, sporting a smile that promises him the freedom he seeks.

Judah’s loses his way on the fret. His picking finger gets tangled in the strings, binding itself within the confines of a single note.

He pitches his attention back to the music. Recovery is messy work but doable without losing his place or the tempo. But the damage is done. The thin veil of privacy with his audience has been torn wide open, and he hears them stirring out of rapt attention.

His grandmother will undoubtedly skewer him for this mistake later.

He brings the piece to a merciful close, and the last note resonates through the yawning darkness of the domed hall. In the ringing silence that follows, his troubles flock back to him like starved birds worrying at his heart. Fear bubbles up his chest, murmuring the same weary refrain: Without applause, there will be no freedom.

His eyes scan the faceless crowd, searching for Frey and his sinful smile but perceives nothing but shadows.

Applause comes at last and rumbles through the first row of the crowd, becoming thunderous as it catches and expands until the sound lifts against the starlit dome.

Relief thaws Judah’s blood as he comes to his feet and bows, one palm pressed flat over his heart.

Around the hall, torches and lanterns quiver back to life as servants flurry to relight them. Familiar and unfamiliar faces both bob into focus. In the sea of smiles, Judah plucks the twinkle of Frey’s striking gray-sky eyes and takes it as his cue to descend the raised stage with his setar.

He is not expecting to come face-to-face with his grandmother. But, of course, she bars his path as she is want to do in the most inopportune of times. 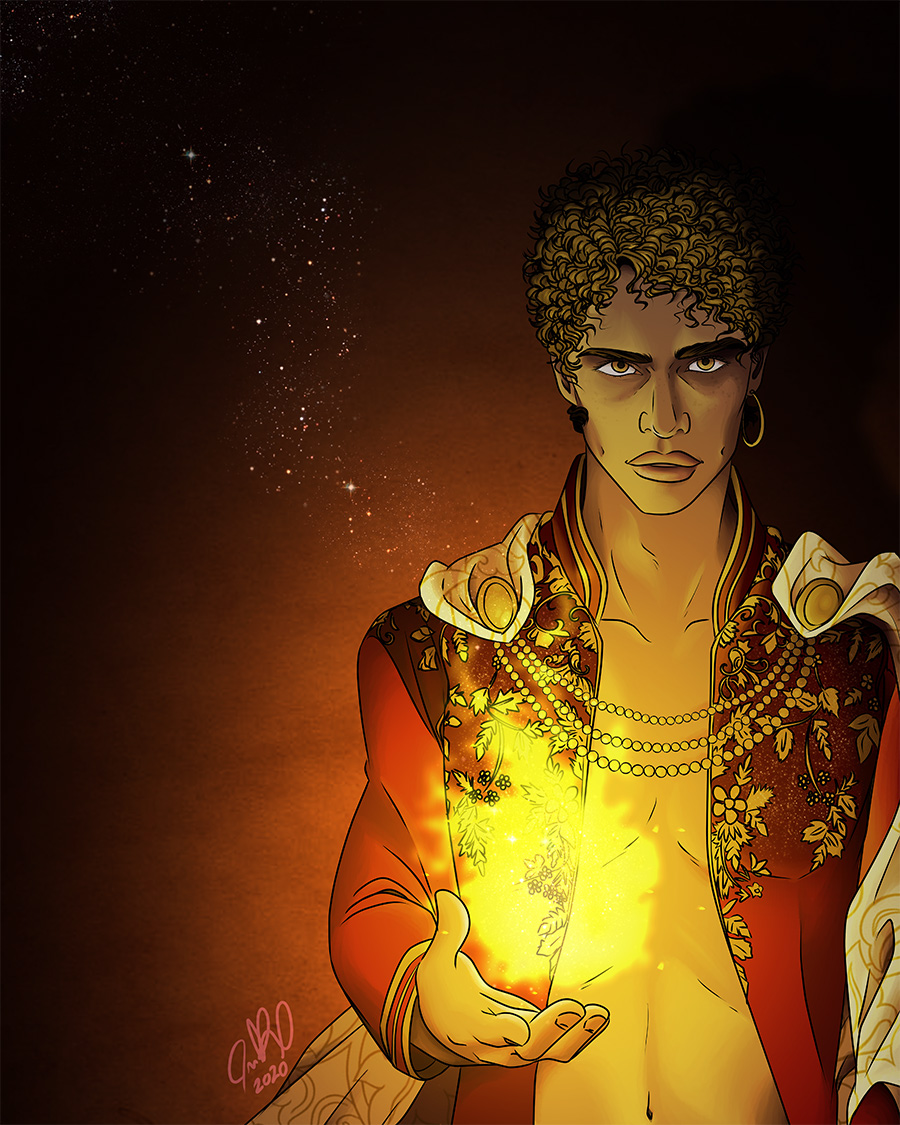 Judah resists the urge to take a step backwards and is requited for it with a bony, uncomfortable hug. He stoops to keep his balance and footing as the golden sequins of Azar’s collar press into his neck like the tips of many small, sharp knives.

Judah returns the gesture with reluctance. The last time he recalls receiving any form of physical affection from Azar was the loving slap she awarded on him for kissing a councilor’s son at a Majlis function. He’d been on the cusp of manhood then, bright-eyed and confused as he pondered the betrayal of his stinging cheek.

Now, Azar tilts her head to his ear as if to kiss the same cheek in congratulations, her words are as cutting as a blade. “Do not muck up the rest of evening as you did that note.”

Judah stiffens. An unpleasant sort of prickling burns under his skin as she pulls away from the arctic embrace.

As she is his elder and the highest ranking member of the Majlis besides, he is expected to lower his gaze. Which is why he stares directly into shrewd, dark eyes that mirror his own. “Of course, Maman Azar.”

The title is merely honorific as ‘Maman’ would normally be reserved for a maternal figure. Calling Azar his mother is not unlike attempting to replace the sun with an imperfect shadow of itself. Besides serving as a subtle reminder of his debt to her, Judah has long suspected that Azar insists on the title to be perceived as a much younger woman than she is.

If only she knew of the colorful descriptors other councilors bestowed upon her behind her back.

She pats Judah’s cheek and dabs on a chilled smile. “Very well. The council is pleased with your performance.”

The council. Not Azar, never Azar, but the council. It curdles Judah’s blood. The council has ruled most of his life without its own knowledge.

“Are they?” His voice is too shrill, and Judah finds his nails clawing the neck of his setar as he tames it into a semblance of civility. “That is pleasant to hear.”

Azar brushes an invisible speck of dust from Judah’s high-collared tunic. “You will speak with them now.”

“Master Frey awaits me,” Judah counters, and he despises the desperation that bleeds out with his confession. “It would be rude of me to keep him waiting longer.”

“Master Frey.” The name warps under the lash of Azar’s tongue, shaped into an oath under her breath. She lowers her voice further and speaks with more urgency. “You are not to waste the entirety of the night talking solely with him. You have much better prospects awaiting you.”

He fails to understood Azar’s thinly veiled dislike of Frey, who boasts both power and monetarily influence, which have always been salient in bargaining his contract.

But he has transgressed the boundaries of his grandmother’s patience too often tonight. “I understand,” is all he says, lowering his gaze to the curled tips of his brocade slippers.

“Very well.” Having exhausted her usual list of Judah’s shortcomings, Azar turns on her heels. “I shall see you at the Midnight Feast.”

Her boots click on the stone floor as she retreats, her azure, felt robes trailing behind her.

Judah releases a breath in the attempt to renounce the conversation from his mind. He will not permit it to stain this otherwise vital night.

For the time to auction his courtesan’s contract has finally come.