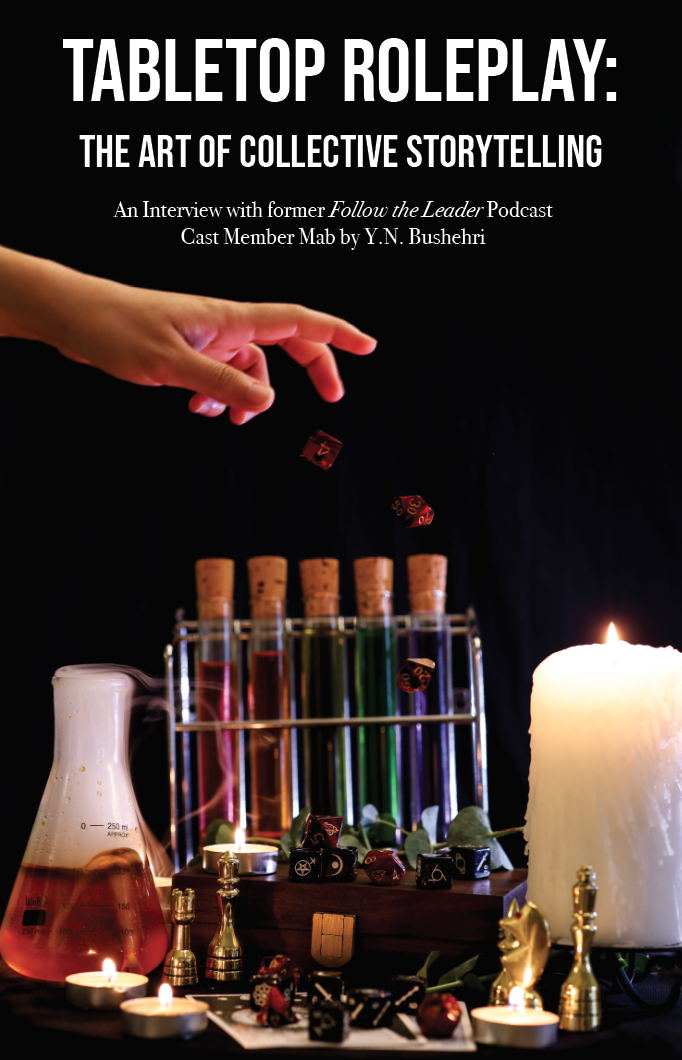 In 2021, tabletop roleplay gaming is a phenomenon that crosses boundaries and bends genres. Beyond the prototypical Dungeons and Dragons, TTRPG’s are giving people spaces to build communities with global reach. In this exclusive interview, former Follow the Leader Podcast  cast Member Mab, a seasoned roleplayer and writer, gives her insights on tabletop gaming and collaborative storytelling.

To start things off, can you tell us a little bit about yourself and how you came to be involved in table-top roleplaying (TTRPGs)?

I absolutely love telling stories and building worlds, so TTRPGs kind of are the exact niche for me. For TTRPGs specifically, while I had been aware of Dungeons and Dragons (D&D) as a concept since the 4th edition (4E) came out when I was in high school, I never actually got into it until shows like Critical Role and The Adventure Zone really took off. By that time, everyone wanted to give it a go, it was always just a matter of “but who is going to drive this thing?” I played in a campaign that lasted two sessions before dissolving, and that was about the extent of it until I realized that the campaign space was a “if you want something done you have to do it yourself” when it came to finding Game Masters (GMs).

What do you think draws people to table-top roleplay games?

There’s the collaborative storytelling aspect of it for sure, but there’s also the knowledge that anything can change at the roll of a die or the flip of a card. Nothing is for certain when you sit down to play a session — not as the GM, and certainly not as the player. And then just taking the wild ideas that others have and rolling with them (pun intended) until you create something that’s even bigger and wilder than you thought possible!

Was it difficult to play during quarantine or was it a safe haven of sorts?

Hard to say. The biggest chunk of games that I’ve played over the course of the last few years have been, by necessity, done remotely—as our cast was spread across the US and stretching all the way into the UK. So nothing changed for those, but they were all GMless and one-shots. The actual GMed games suffered for it, in between the fact that we couldn’t meet in person, or my creative focuses were channeled into something else entirely.

Do you have a character creation process? If so, what’s it like?

I tend to be willing to fill in blank spots where needed to round out a roster, but also it’s sometimes as easy as going to Pinterest and finding a Vibe(™). For games that are more loose with character creation rules, I’ll muse on the setting and the options available before going with what comes to mind first. No real rhyme or reason, but I tend to go with an aesthetic or a vibe (a song, or a picture) and build around that. A personality will form after that, and a name will most always come last.

The big difference between TTRPGs and a lot of other forms of collaborative storytelling is that TTRPGs rely heavily on improv and a degree of trust—in the GM and the other players at the table. Writing fiction, creating an interactive game, producing a video--there’s the ability to stop, edit, and rework what you’re creating. When you’re at the table and playing live, then the emotions hit a lot differently. As a GM, the emotional payoff when a plot point comes round to full realization by your players? Chef’s kiss.

There are lots of pros/cons to all types of systems, from GMless to GMed, and I’ve experienced a lot of them. The biggest flaws boil down to people can either be too controlling or can’t drive the plot forward. A GM can railroad their party to the point where they are better off writing a novel, or a GM can set their party in a new place and say “well, I have things planned, but you’re free to do whatever you want” and never get it back on track. GMless games can have one player become too controlling of the scenario where they then railroad a game that’s supposed to be collaborative, or you can be stuck at a table with people who are too passive, and you can spend four hours telling a story that doesn’t actually go anywhere.

I absolutely love telling stories with other people, because they bring points and ideas to the table that I never would have considered. TTRPGs give you an established base to work off of, and help you focus on a specific setting more than writing fiction does. 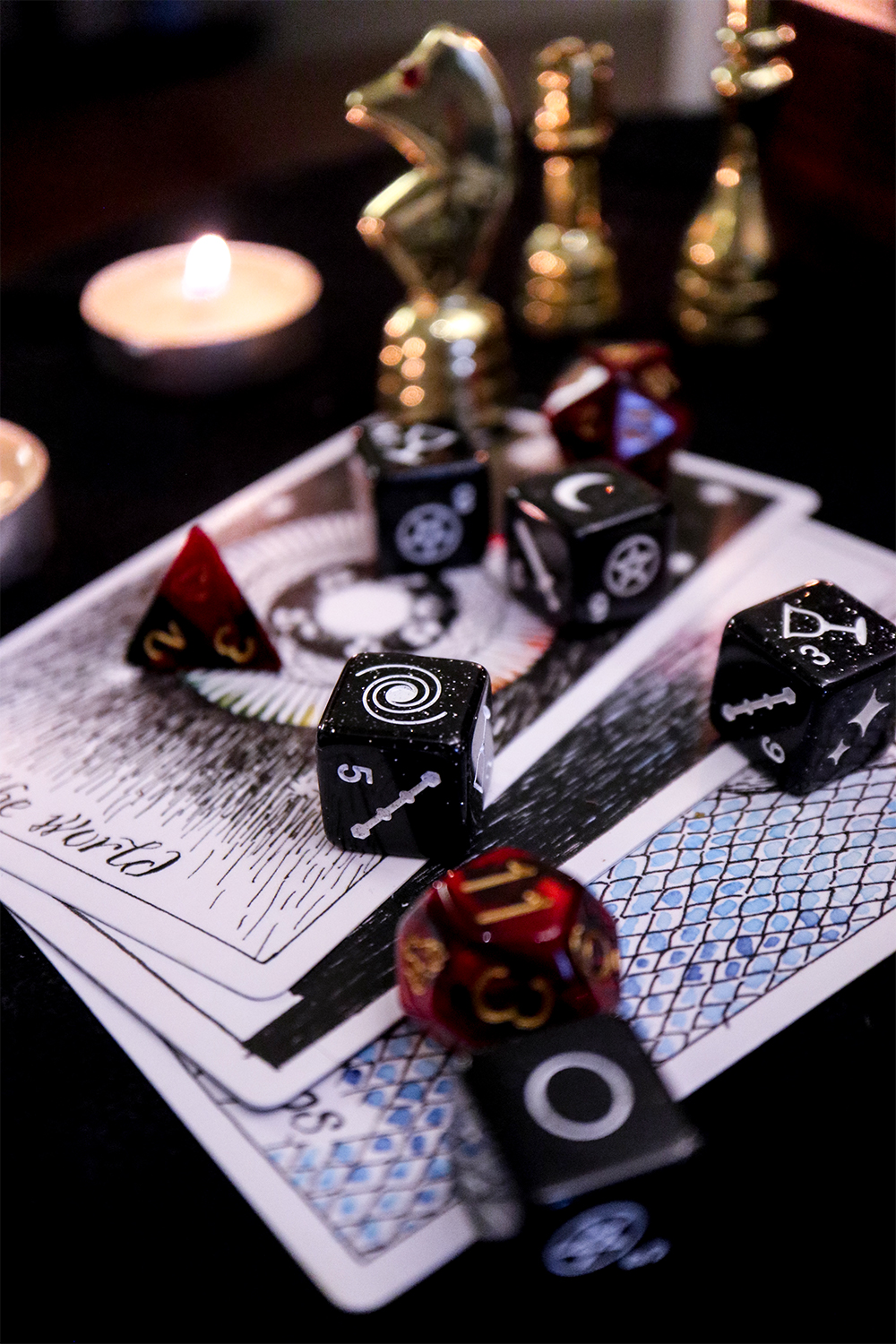 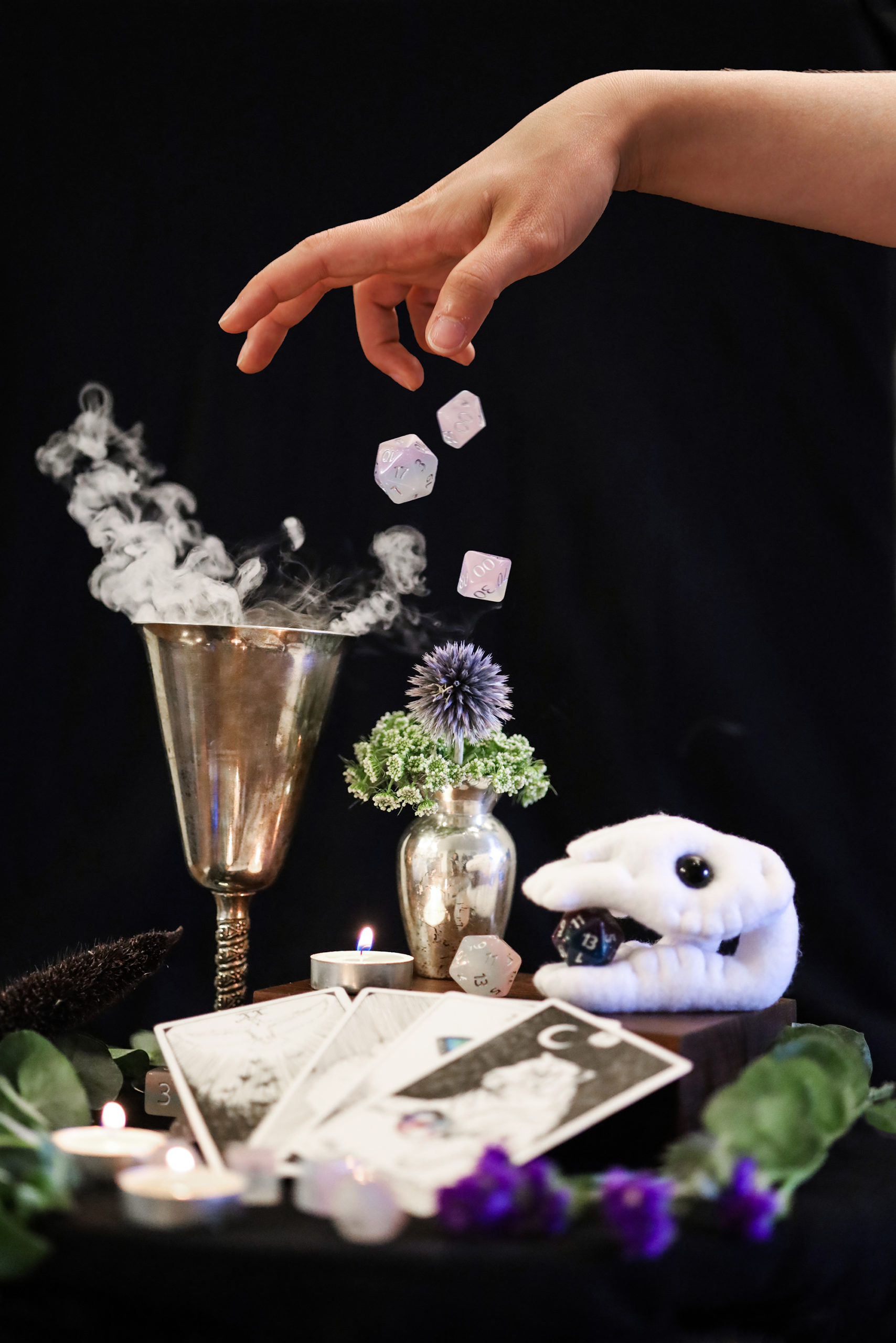 What advice would you give to other players looking to get the most from their TTRPG experience?

If you’re new to TTRPGs, or even if you’ve been around the block already, I highly encourage you to discuss safety mechanics with your GM and fellow players if you haven’t. There are a lot of great resources out there, and I know that most big-box games don’t come with them baked in. Things like lines and veils are incredibly important to learn where you don’t want to tread, and where you’re okay to approach but ultimately want to fade to black on. An open discussion is important to have — I mentioned needing to have trust, earlier, when you’re at the table. A GM can hold a lot of volatile pieces in their hands, and coming to the table should always be fun. The last thing you want is your GM (or you as the GM) to ruin a player’s fun because a topic is brought up that crosses a boundary or just travels down a path that is not interesting.

Discuss the x-card, being able to say ‘no’ if you don’t like something, and most importantly, take into consideration things that players are/aren’t interested in! A new GM for a personal game I’m in gave us all a super-quick questionnaire to answer both in and out of character before we started as a way to establish interests and hooks in the character’s backstory, and on things that we as players were interested in exploring or didn’t want to see in a campaign!

Follow the Leader is an actual play podcast focused on telling character-driven stories through the use of GMless tabletop roleplaying games. Learn more at ftlcast.com or follow them on Twitter - @ftlcast. Find more from Mab via @littleladymab on Twitter/Tumblr/Patreon.